On the day the Dutch foreign minister visited the Turkish capital Ankara, a Dutch journalist was briefly arrested at her home in Diyarbakir, a southeastern city with mainly Kurdish inhabitants.

The Dutch journalism union, the NVJ, on Wednesday also announced that a Dutch-Turkish journalist was arrested for making photos in a court room in 2013.

Geerdink was not taken into custody, but taken to a police station for questioning, an event she described as “very intimidating”.

The Dutch journalist, one of the few foreign correspondents based in Diyarbakir, often writes about the Kurdish minority in Turkey.

Geerdink said she was suspected of creating propaganda for a terrorist organisation.

“They mean the PKK,” she said, referring to the Kurdistan Workers’ Party.

“They asked me about my interview with Cemil Bayik, the second in command of the PKK. … Citing someone like that can [in Turkey] be explained as creating propaganda.”

Geerdink was released the same day, but her arrest was criticised by the Netherlands.

“It is good news that Geerdink is free again, but press freedom in Turkey will remain an important focus for the Netherlands and the European Union”, minister Bert Koenders said in a statement. 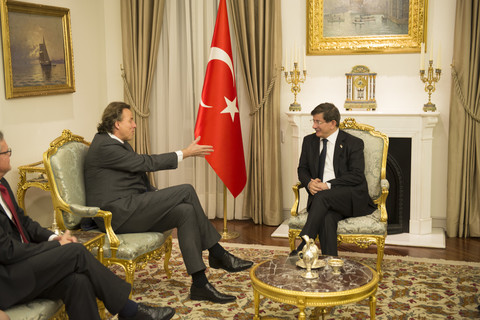 The Dutch politician was in Turkey to improve relations between the two countries, which were strained in November when the Turkish ministry of foreign affairs criticised Dutch immigration policies.

“In the past year Turkish citizens were confronted with breaches of judicial independence, limitations in the area of freedom of speech, arrests of journalists and raids on media. Those are worrying developments”, he said.

In late 2014, the Turkish police arrested around 30 journalists, a move that resulted in heavy criticism from the EU.

The European Parliament is next week set to discuss media freedom in Turkey in its plenary session in Strasbourg.

Centre-left MEP Kati Piri said on Dutch radio that the situation for journalists in Turkey is deteriorating.

“We have seen in the past two years … a decline in press freedom”, Piri said.

But Turkey’s leader, Recep Tayyip Erdogan, has rejected the EU’s criticism, telling the bloc to “mind its own business”.